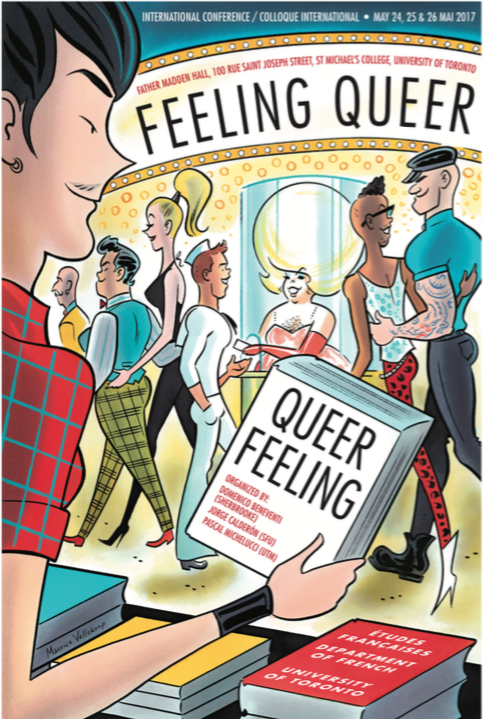 See this attachment for details of the conference

As a physical and psychological phenomenon, affect takes place in the body and is both outside of and beyond representational mediations, as it mobilizes the concrete experience of the self, of others, and how we are in the world. In response, theories of affect are in our opinion tactical and strategic attempts to come to grips with shifting and nuanced aspects of infinite difference, to qualify the gradient of difference and alterity at the very core of the self. Certainly, we speak of feelings, sensations, emotions, perceptions, and “passions” but theories of affect call for critical sympathy and attention to attempt to translate into another language that which does not happen in words. We must take into consideration that words and concepts are only partial, incomplete, and imperfect attempts at translating experience and that translations reduce the complexity, wealth, diversity, multiplicity, plurality and singularity, of the phenomenon which we want to best describe. How can one then begin to apprehend that which is not within the range of oral or written language, that which cannot be communicated directly, and that which can be showed but not relayed in literature, cinema, painting, or by any other art form? How do we go about capturing, either materially or conceptually, that which cannot be apprehended or seized in any other way?

Another consequence of the desire to identify, classify and name the unnamable is to turn analysis into forms of discipline and to standardize the experiences of human beings, with both intended and unintended cultural, social, and political results which have to be critiqued. To be part of a family, a group, a community, and a nation, individuals must learn to regulate and adjust affects and affectivity in accordance with the norms that construct, in both public and private spaces, the shared or collective affective commons of the community. Whenever the translation of bodily expressions of affect is in turn constrained by social forms of regulation, then the possibility for an individual to identify with preestablished sanctioned forms of affectivity becomes, in fact, a negation of their own affect, and by extension of the singular and original self. Cultural, social, institutional, and political hegemonies – absolutely external to the individual – create, shape, and give meaning to what is believed to be the most profound expression of interiority. Interiority, as expressible, becomes an effect of illusion and external control.

Turning to Spinoza’s thought, Brian Massumi offers one of the simplest definitions of affect that can be offered as « […] “the capacity to affect or be affected.” This is deceptively simple. First, it is directly relational, because it places affect in the space of relation: between an affecting and a being affected. It focuses on the middle, directly on what happens between. More than that, it forbids separating passivity from activity. The definition considers “to be affected” a capacity” (Politics of Affect 91). Massumi places affect in an intersubjective, interrelationnal space that is both interactive and primarily physical, concrete, and corporeal. Affect touches each individual, each subject and, at the same time, it is a phenomenon that inheres in the collective, in plurality, and in multitude. Affect shapes us and informs us. It also offers response and resistance. For those reasons, it is also linked with questions of power – a diffuse power, a dissemination of power, a power which affects us and by which we affected and that remains imperceptible even in its most material effects. The power of affect and the affect of power are consequently intimately intertwined in the cultural, social, and political spheres.

The work of these critics and theorists reconsiders, updates, and problematizes the tradition of analysis of the passions, sentiments, feelings, sensations, and emotions. They also approach in very different ways the older problematics of rhetorics, poetics, hermeneutics, and aesthetics. Several take up and reframe the canonical work of Spinoza, Hobbes, Rousseau, Kant, Husserl, and Bergson. The encounters between queer theory and affect have thus recently become stimulating and productive in critiques of queer embodiment and its relation to the social, the emergent, and the world.